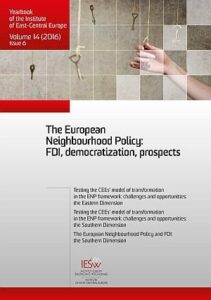 Testing the CEEs’ model of transformation in the ENP framework: challenges and opportunities: the Eastern Dimension (en translation)

K. Falkowski, ‘Testing the CEEs’ model of transformation in the ENP framework: challenges and opportunities: the Eastern Dimension’, Yearbook of the Institute of East-Central Europe, vol. 14, no. 6, 2016, pp. 9-25.
Article

Testing the CEEs’ model of transformation in the ENP framework: challenges and opportunities: the Southern Dimension (en translation)

Katarzyna Żukrowska
Views count: 302
This paper examines the content of the transformation strategies which were applied in countries of East-Central Europe (CEEs) and highlights these of their experiences that can be emulated to countries included in the Southern dimension of the ENP. Big disparities exist among countries included in the ENP’s Southern dimension as well as among the CEEs. Nevertheless, the goal in both groups of countries has been the same, i.e. to build a stable market economy and democracy and improve citizens’ prosperity. The methods applied have a number of elements in common like the institutions engaged, models applied, instruments used. The possibilities of the application of the CEEs’ model seems to be limited at first sight but there is a number of elements that the strategies applied in both groups of countries have in common. These include the opening of the economy, cooperation with the IMF, World Bank, WTO and the EU, closer regional ties with some harmonization of laws and building a FTA, which is followed by an increasing attractiveness for investors and the stimulation of job creation and exports. On top of that, regional opening should be supported by the process of wider openness, followed by specific solutions applied internally in each of the economies.

K. Żukrowska, ‘Testing the CEEs’ model of transformation in the ENP framework: challenges and opportunities: the Southern Dimension’, Yearbook of the Institute of East-Central Europe, vol. 14, no. 6, 2016, pp. 27-47.
Article

Joanna Stryjek
Views count: 456
The launch of the ENP was accompanied by a significant increase in FDI inflows to MENA economies. This rendered the ENP’s supporters hail its relevance. However, it is questionable if the rise in FDI inflows to the MENA region over the period 2004-2013 can be attributed solely to the launch of the ENP. This paper demonstrates that, while over time the volume of FDI inflows to MENA countries increased, it should be attributed to three groups of factors, i.e. positive FDI trends in the world economy; actions by MENA countries aimed at reforming their economies and making them more FDI-friendly; development of economic cooperation with the EU member states as well as with other countries and/or regions. In this view, the onset of the EU-MENA cooperation, the ENP framework included, constituted only one set of factors that influenced the volumes of FDI inflows to the MENA region over the period in question.

Mirosław Filipowicz
Views count: 453
The EaP embodies a potent idea and a policy-framework that equips the EU with a set of tools to address the specificity of the EU’s eastern neighbours, certainly apart from Russia. The EaP presents itself in this context as a seminal, even if largely implicit, attempt to consolidate the idea of East-Central Europe as an entity that is culturally and politically independent from Russia. Paradoxically, the concept and, indeed, the idea of East-Central Europe have not been as firmly established in the popular consensus as the inhabitants of the area in question would have assumed even in the late 20th century. Indeed, following the collapse of communism in 1989, a simple mention by the political establishment, e.g. in Poland, of its prospective European integration, was received by many in so-called West with an unease. It has taken another nearly three decades for the idea of cultural and political distinctiveness of East-Central Europe to be recognized. Still, the case of Ukraine suggests that it is far from being consolidated. Therefore, if our concern today is Ukraine, but also Russia and its European vocation, it is necessary that the ideas that have shaped the prevailing conception of the region and its identity are re-thought. The objective of this paper is to do just that.

Joanna Kwiecień
Views count: 442
Launching the relations between the EU and the Southern Mediterranean region was an outcome of a certain ambitious vision that was aimed at the creation of a common space for dialogue, exchange and cooperation in the name of peace, stability and wealth. However, the mix of challenges with involvement of foreign powers in particular, has made the unification of the Southern Mediterranean region almost impossible and, thus, the cooperation itself with the EU very hard. The aim of this study is to analyse the development of the EU-Southern Mediterranean relations referring to the institutional milestone points: establishment of the EMP, its absorption by the ENP, and finally, its revitalization in the form of the UfM. In the first three parts of the study, the subsequent institutional frameworks are presented and discussed with special attention paid to the bilateralism and regionalism issues. Then, a brief overview of further possible institutional solutions for the EU-Southern Mediterranean relations is considered. The study is concluded with some important remarks.

J. Kwiecień, ‘The idea of the Southern Mediterranean and its role in shaping the logic behind the Southern Dimension of the ENP’, Yearbook of the Institute of East-Central Europe, vol. 14, no. 6, 2016, pp. 87-105.
Article

The socio-cultural dimension of the Southern Partnership: contingencies and prospects (en translation)

Katarzyna Górak-Sosnowska
Views count: 452
This paper examines the socio-cultural dimension of the EU’s policy towards countries in the Southern Mediterranean (SEM) region. It dwells on the specific provisions of the Euro-Mediterranean Partnership (EMP) as well as the most recent programmes. From this perspective those programmes’ relevance and effectiveness are discussed.

K. Górak-Sosnowska, J. Danecki, ‘The socio-cultural dimension of the Southern Partnership: contingencies and prospects’, Yearbook of the Institute of East-Central Europe, vol. 14, no. 6, 2016, pp. 107-119.
Article

Ideas in the ENP. Conflicting visions and interests of the ENP between the EU member states and institutions? (en translation)

Katarzyna Żukrowska
Views count: 432
The European Neighbourhood Policy (ENP) creates the framework for cooperation with states located close to the EU borders. At the same time, it necessitates that different visions of what this policy should be, as represented by countries included in this policy framework, the EU member states and the EU institutions negotiate and reconcile. Although apparently different, these three visions of what the ENP should be – have one common denominator. The argument in this paper addresses the sources of the different approaches to the ENP and against this backdrop suggests ways of bypassing those controversies. To this end, some solutions that were applied in the process leading to eastern enlargement of the EU are pointed to. It is argued that more of that experience, expertise and know-how could be emulated to the ENP today as its shape is influenced by the EU institutions, the EU member states and countries to which it is addressed.

K. Żukrowska, ‘Ideas in the ENP. Conflicting visions and interests of the ENP between the EU member states and institutions?’, Yearbook of the Institute of East-Central Europe, vol. 14, no. 6, 2016, pp. 121-145.
Article

ENP in the context of the EU’s external policy framework: a critical examination of the ENP’s outcomes and prospects (en translation)

Joanna Kwiecień
Views count: 441
The EU has an ability to induce change in its neighbourhood by a wide range of means. The question is how deep and how extensive that influence can be. The objective of this paper is to address this issue. To this end, following an overview of the ENP’s evolution, the challenges that the ENP faces are discussed. It is argued that although the ENP has not always proved an efficient EU’s external policy instrument, it retains an important position in the EU’s external policy with a wide range of economic and political instruments extended to the ENP partner-countries.

J. Kwiecień, ‘ENP in the context of the EU’s external policy framework: a critical examina-tion of the ENP’s outcomes and prospects’, Yearbook of the Institute of East-Central Europe, vol. 14, no. 6, 2016, pp. 147-163.
Article

Marta Ostrowska-Chałupa
Views count: 460
The objective of this paper is to examine the influence of the establishment of the European External Action Service (EEAS) on the shape and implementation of the European Neighbourhood Policy (ENP). To this end, EEAS role in the process of ENP implementation is discussed and some comments regarding its possible future development are made. It is argued that while EEAS does have an influence on the shape of the ENP, similarly as in the past, the key decisions concerning the ENP will be taken at the intergovernmental level.

Processes of deliberation and negotiation in the revamped ENP: Divergent modes of governance that emerge at the intersection of EaP/SoP and the EU and its member states (en translation)

Joanna Kwiecień
Views count: 442
The understanding of the process of negotiation as a mode of neighbourhood governance requires that three questions be explored, i.e. the salience of the EU enlargement policy as a source of inspiration for the European Neighbourhood Policy (ENP); the complexity of the negotiation process with several factors that shape the context, including most importantly the actors involved, their interests and preferences as well as their specific strategies, negotiation and communication styles; and the implications of the ideas behind the ENP as a result of which the target regions were treated in an uneven manner from the beginning. The paper seeks to assess the influence of the instrument of ‘negotiation’ on the background of other modes of neighbourhood governance. At the same time, it aims at furthering analysis of the ENP through the ‘negotiation perspective’ in order to deepen our understanding of this policy-framework.

J. Kwiecień, ‘Processes of deliberation and negotiation in the revamped ENP: Divergent modes of governance that emerge at the intersection of EaP/SoP and the EU and its member states’, Year-book of the Institute of East-Central Europe, vol. 14, no. 6, 2016, pp. 183-197.
Article

Shifting emphasis of the ENP: is the EaP less ‘sexy’? (en translation)

Tomasz Stępniewski
Views count: 471
The ENP is an offspring of the EU’s ambition to manage its relations with countries located in the Southern Mediterranean. In this sense, starting with the Barcelona Process and the ensuing Euro-Mediterranean Partnership, the power of political gravity in the ENP has always pulled this policy framework toward the South. From this perspective, the ability of the governments of Poland and Sweden to successfully promote the idea of the establishment of the Eastern Partnership, meant as a way of re-balancing the ENP’s focus and pre-empting the emergence of a possible power vacuum in the region, deserves particular attention and applaud. To certain extent and in a forward thinking manner, once agreed upon, the EaP became a powerful instrument for the EU to manage its relations with countries beyond its eastern borders. Today, given the developments in the EU’s southern and eastern neighbourhood, the salient question is if the EaP will retain the clout it requires if the EU is to efficiently manage its relations with countries Eastern Europe and in the broadly conceived post-Soviet space. The objective of this paper is outline the key problems and challenges that may protract the EU’s capacity to do that.