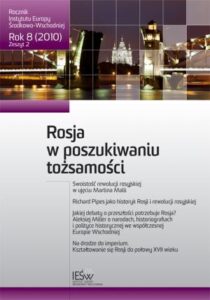 Paweł Kłoczowski
Views count: 176
The article is a review of Martin Malia’s History’s Locomotives. Revolutions and the Making of the Modern World recently published in Polish translation. The author starts by deploring the wrong title selected for the publication by the American editor, Yale University Press, and also used by the Polish editor, PWN. The Marxist metaphor for the revolution – “history’s locomotives” – suggests that there is a historically determined one-track, one-way road to modernity that all countries must follow. This is precisely the opposite of Martin Malia’s view, according to which there are many different roads to modernity and not just one. The Leninist seizure of power in Russia in 1917 was not a road to modernity but a road with dead end. Malia makes a careful comparative study of various revolutions, mainly the three “Atlantic” Revolutions (English, American and French) and the Russian October Revolution and comes to the conclusion that whereas the English, American and French are species of the same kind because they resulted with an establishment of a civil society with a free market, the Russion Revolution of 1917 belongs to a different kind of revolutions altogether. According to Martin Malia the specificity of the October Revolution is more linked with the Marxist-Leninist ideology than with peculiarities of the Russian history of autocracy. The October seizure of power was the seizure of power of a new, Leninist type of party and not of the working class as the Marxists wanted us to believe. According to Malia the Leninist interpretation of Marxism was a legitimate, realistic and completely orthodox interpretation of Marxism and not its aberration or betrayal of Marxists. On that point Malia’s views are the same as those of such Polish Sovietologists as Leszek Kolakowski and Andrzej Walicki.

Mirosław Filipowicz
Views count: 137
The article presents the work of a distinguished American historian of Polish origin, Richard Pipes, in the scope of the history of Russia and the initial stage of the Soviet Union existence. The author of the article develops a thesis that Pipes is one of the most important researchers of the Tsarist and Bolshevik empire due to his research skills, cognitive intuition and, most of all, great academic competence. The evidence for this statement is delivered by Pipes’s numerous publications, also in Polish.
Article

Tomasz Stryjek
Views count: 113
The Russia of the turn of the 20th and 21st centuries is a state searching for the place on the world map and contending with its imperial heritage. The example for this dichotomy is academic and journalistic activity led by Aleksiej Miller, one of the most distinguished contemporary Russian historians and political scientists, the main character of the present sketch. The analysis concentrates on Miller’s academic work, concerning the question of historical policy of Eastern European countries and Russia, Ukrainian-Russian relations and the place of both the states in this part of the continent. Undoubtedly, Aleksiej Miller is one of the most renowned specialists in these research fields, who understands (or tries to understand) his neighbours’ arguments although remaining a Russian patriot, actively engaged in the justification of Russian historical policy towards the neighbouring countries.
Article

Andrzej Gil
Views count: 121
mperialism has been inscribed in the history of Muscovy/Russia since the very beginning of its existence as an independent political entity. Its growth was reinforced by the Mongol-Tatar state, at the expense of other Ruthenian principalities. The Muscovite imperial concept was mainly based on competent making use of various processes and phenomena in Muscovy and its immediate surroundings. It was a specific utilitarianism of ideas, exploiting everything that could bring any benefit. Territorial gains and spreading spheres of influence were explained as if post factum; the very success was the most important, resulting in the spreading of the Grand Duke’s/Tsar’s power. The article presents the process of creating the Russian empire with particular interest in the reign of Ivan IV the Terrible and his successors – the Tsars: Fiodor , Boris Godunov, Vasili Shuyski and the first Romanovs.
Article

Józef Życiński
Views count: 334
The dialogue undertaken recently between the Orthodox Church in Russia and the Roman Catholic Church in Poland brings a new chance to ascribe a new empirical meaning to the famous metaphor of “two lungs” formulated by Vyatcheslav Ivanov and repeated by John Paul II in his documents dealing with spiritual unity of the European continent. In this dialogue one should not look for one commonly accepted interpretation of the Polish-Russian history that would be shared by both sides. Defining details of the European history does not constitute the duty of Christian Churches. In the present challenges brought by the actual secularization process it has been especially important to spread the Gospel of Jesus Christ in the spirit of unity postulated by Christ himself. This task seems particularly important in the process of European integration when the inspiring role of Christianity is required to save the role of spiritual values in the evolving culture of our continent. The Orthodox-Catholic dialogue brings chances for demonstrating Christian unity necessary for postmodern European culture.
Article

Jerzy Bartmiński
Views count: 112
The article presents the problem of co-operation between the academic centres of Lublin and Moscow, undertaken in the last three decades on the grounds of common ethnolinguistic research. The expression of the Lublin environment’s interest in this field of science is “Ethnoliguistics”, the annual which is also the place for Russian academics to publish their works. The promoter of common Polish-Russian academic enterprises is Professor Jerzy Bartmiński. One should hope that the effective co-operation will run in a more and more favourable political atmosphere.
Article

Piotr Mitzner
Views count: 118
The Russian language monthly “Новая Польша” (New Poland), inspired by Jerzy Giedroyc, first appeared in September 1999. From the outset, this publication was intended for a sophisticated Russian audience, and for a Russian speaking readership – in particular for those cultural and political élites which are open to new ideas. Jerzy Pomianowski, a foremost Polish expert on Russian affairs, has been the editor-in-chief since the first issue. The publication deals with important problems faced by today’s Poland; yet it does not avoid topics resulting from the common history of Poland and Russia, nor does it shy away from the difficult and often painful issues of our past. It is even open to dialogue with those whose attitude to Poland is one of hostility. Thanks to its enormous popularity, “Новая Польша” is able to speak about Poland’s relationships with its other neighbours, especially with the Ukraine and with Germany. As relations between Russia and Poland undergo changes, it is hoped that this publication will help to break down the stereotyping on both sides and will contribute to a positive transformation of Poland’s image in Russia.
Article

clivio
Views count: 146
The article is devoted to the contribution of the Poles – Russian army officers – to the process of army modernization. The author has identified several such people who – either through work in military academies or through specialist publications – contributed to the modernization of the Russian military forces. This paper merely touches upon the problem which, being highly significant, should be developed into a wider and more complex scientific enterprise.