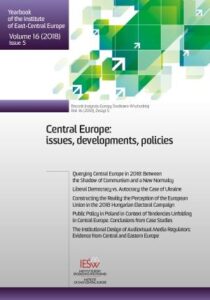 Olga Barburska
Views count: 183
The aim of the article is to present and analyse the major ideological and political factors shaping the Russian Federation’s attitude towards the European Union. The analysis focuses on the main ideological concepts, shaped historically and functioning today in Russia, which influence political programmes and undertakings implemented by the Russian authorities in their relations with the EU. This analysis is based on the assumption that there is a deep-rooted conviction among the Russian élites and society that their system of values and culture are diametrically opposed to that of the West, and especially of Europe, and that this results in a general hostility towards the EU. As a result, this creates enormous difficulties in maintaining normal, stable relations between the two parties.

Olga Barburska, ‘Ideological and political dimensions of Russia’s attitude towards the European Union’, Yearbook of the Institute of East-Central Europe, Vol. 16, No. 4, 2018, pp. 15-39.
Article

Ostap Kushnir
Views count: 179
The article outlines the geopolitical rationale behind contemporary Russian expansionism, as well as presents the asymmetric and “hybrid” mechanisms utilized by the Kremlin to solidify its authority in the post-communist space. To do this, the article refers to the findings of American, British, Polish and Ukrainian intellectuals on the nature of the Russian political identity. The four commonly used theoretical frameworks explaining contemporary Russian expansionism are described and critically assessed (imperial, diversionary, divergent identities and “angry guy”). Apart from this, the Russian and foreign political philosophic thought of the XIX-XXI centuries is referred to. The latter was done to trace the evolution of the Russian Byzantium-type governing tradition and national identity. The article puts forward the hypothesis that Russian expansionism, alongside the Russian sentiment towards an imperialist worldview, are tested by historical patterns of national policy-making which bring the state to its civilizational glory. In this light, it will be futile to expect that Russia can fully democratize, build a Western type of a nation-state and start conducting open policies.

Zbigniew Ścibiorek and Marek Bodziany
Views count: 199
The current state of coexistence in international arena is contested. Russian Federation (RF) cannot come to terms with the fact that following the dissolution of the USSR, it sustained substantial losses, especially with regards to its role globally. The team of Putin is striving to rebuild the power of their country. The Russian society, used to sacrifices for the homelands, offers its invaluable support. A lot of effort is put in the development of the armaments sector. As a result, the structure, command and mobilization the Armed Forces have substantially improved. The RF Armed Forces prepare for a possible armed conflict. Various types of exercise are conducted; frequently maneuvers take place in proximity to the borders of NATO member-states. This paper examines these developments and suggest possible ways of bypassing the emerging challenges.

Zbigniew Ścibiorek, Marek Bodziany, ‘The combat potential and the security strategy of Russia – towards rebuilding the position in the international arena’, Yearbook of the Institute of East-Central Europe, Vol. 16, No. 4, 2018, pp. 61-85.
Article

Katarzyna Pisarska
Views count: 178
The article examines Russian Federation’s relations with both South and North Korean in the years 1991-2018 and tries to make an assessment of the potential role Russia could play in a future reunification process of the peninsula. The author examines three possible scenarios of such a process: a peaceful reunification, a reunification that would result from North Korean regime’s collapse or from an all-out war on the peninsula. It is argued that although the Russian Federation might prefer to see the continuation of the current status quo, in case of any potential security environment shift the peaceful reunification scenario will best assure Russia’s interest in the region.

Katarzyna Pisarska, ‘Russian Federation relations with South and North Koreas and its role in the reunification of the peninsula – scenarios for the future’, Yearbook of the Institute of East-Central Europe, Vol. 16, No. 4, 2018, pp. 87-106.
Article

Adrian Chojan
Views count: 181
This article discusses Poland’s eastern policy as it unfolded over the period 2016-2018. Against this backdrop it examines how the right-wing coalition 2015 ascent to power impacted the foreign policy of the Republic of Poland. It is argued that the lingering of Poland’s engagement in its eastern neighbourhood is conditioned by developments on the Polish political scene, which – in some cases – is also reflected in a change of narrative toward the eastern neighbours, especially Ukraine.

Mateusz Kubiak
Views count: 187
Mass protests which erupted in Armenia in April 2018 were the biggest demonstrations in this country since the nineties of the XX century. With the dismissal of prime minister Serzh Sargsyan and appointment of the “temporary” government, the so called #RejectSerzh movement has been quickly proclaimed as another velvet revolution. The 2018 protests led to such an unexpected outcome because of the number of factors: their well-thought organization based on the civil disobedience methods, simultaneous decentralization of the protesters and clearly defined aim – ousting the incumbent prime minister embodying corrupted, oligarchic political system. At the same time it seems that the #RejectSerzh movement would not achieve such a success without the “legacy” of the civic, grassroots initiatives taking place in Armenia since 2008 and especially since 2013. All of these movements were highly interlinked and constituted continuous (however still incomplete) creeping revolution leading to the change of the oligarchic political system in Armenia.

Artur Adamczyk
Views count: 184
Turkey’s current foreign policy is based on the slogans of the revision of the Lausanne Treaty of 1923, which established the external borders of the Turkish state. The revision demands of this treaty are particularly dangerous to the security of Greece and the territorial integrity of this country. Turkey questions the limits of the continental shelf, the exclusive economic zone, the territorial sea and airspace of Greece. Since the mid-1990s, Turkey has also begun to question the Greekness of the Aegean islands. The danger of an outbreak of conflict between Greece and Turkey in the Aegean Sea may lead to the renewal of conflicts in the Balkans and thus to the decreased security of other European Union countries.

Artur Adamczyk, ‘Treaty Revisionism in Turkey’s foreign policy – a threat to the security of Greece and the European Union’, Yearbook of the Institute of East-Central Europe, Vol. 16, No. 4, 2018, pp. 147-165.
Article

Elżbieta Szyszlak
Views count: 182
The Turks are the largest national minority in Bulgaria. Since the creation of the independent Bulgarian state in the 19th century, i.e., since the Turks began to function as a minority group in this country, they have not identified with their new homeland nor integrated with other ethnic groups. After 1989 the situation has changed, the symbol of which is the activity of the Movement for Rights and Freedoms (DPS). The article addresses the situation of the Turkish minority in this new, changed reality of modern Bulgaria.

Elżbieta Szyszlak, ‘Between Sofia and Ankara – the Turkish minority in contemporary Bulgaria’, Yearbook of the Institute of East-Central Europe, Vol. 16, No. 4, 2018, pp. 167-185.
Article

Ludmila Golovataia and Dan Dinner
Views count: 179
The problem of people’s forced displacement refers to the most acute. People displaced by conflict, persecution or other human rights violations are the most vulnerable groups in the world. The question of how to regulate migration in such a way as to enhance its positive effects, reducing the negative ones is one of the most important in countries. Russia, like other industrialized countries, attracts migrant. However, there are significant differences between European countries and Russia. The aim of the paper is to investigate the problem of refugees and internally displaced persons in the Russian Federation in international legal, political and social aspects and possible ways for its solution. The article reflects general condition of refugees and internally displaced persons, taking into account the specifics of the political socialization process in Russia.