Abstrakt: The multisecular relations between France and Germany have been more often a history of rivalry and conflict than of a peaceful neighbourhood. The wars between them in the 19th and 20th century brought the loss of millions of human lives, unprecedented material destructions, growth of mutual distrust and antipathy. Two French statesmen – Aristide Briand and Robert Schuman – tried to put an end to this vicious circle of confrontation and revenge. Both of them attempted to gradually build up a climate of confidence and reconciliation between the two countries and link them by as many ties of cooperation and interdependence as possible, in the framework of a united Europe. The former failed, mostly because of the destructive force of the great economic crisis of 1929. The latter, who believed that “Germany was never more dangerous than when she was isolated”, succeeded in bringing about a reconciliation and rapprochement between the two countries within the first European Community created thanks to his innovative ideas and his diplomatic skills. He was able to count on the understanding and cooperation of Konrad Adenauer, who became head of government of the Federal Republic of Germany, created in 1949. The chancellor, known in the inter-war years as a convinced anti-Nazi and follower of the European idea, was longing for an organic integration of Europe, as the best guarantee of peace and a frame within which the German people could assimilate the Western political culture to replace that of nationalism and militarism. Gradually, the Franco-German duo has grown to be the leading force of the European Community/Union. However, in the last few years and months the concord and cooperation between France and Germany entered a period of crisis and continuously growing distance. The reasons of this change are manifold. First of all, there is a profound difference and incompatibility of political traditions and social cultures of the two nations: one still characterized by the Jacobin spirit and acute class conflict; the other based on a constant search of consensus and compromise for the sake of general interest. These factors largely determine the present economic situation of France and Germany. The former is lacking in competitive capacity, besieged by massive unemployment, enormous public debt and public deficit. The latter is dynamic and prosperous, particularly against the background of the present world economic crisis. The “European” policies of the two countries have also been diverging. France, theoretically committed to the idea of integration, has been in fact reluctant to cede portions of her sovereignty to the EU institutions. On the contrary, Germany has been consistently favourable to a reinforcement of the competences of EU organs and to an evolution of the EU towards a real federal system. Of course, the estrangement between the two biggest EU member countries implies serious risks for Europe. But, if skilfully managed, it may also offer a possibility to bring about an internally better balanced Union and a significant progress of European integration. 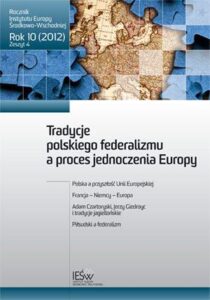