Abstrakt: Historians from Kielce, affiliated with the Institute of History of the Jan Kochanowski University, started their research on Polish–Russian relations in the 19th century in the 1990s. They focused on three key issues: the first concerns the fate of the Poles in the Russian Empire, including their service in the Russian army and their exiles to Siberia. The second issue concerns the history of the Russian administration, political police and the Polish society in the Polish Kingdom and in so-called 9 western provinces of the Russian Empire (Lithuania, Belarus, Ukraine). The third issue concerns the problem of russification of the Polish educational system. The initiator of the first topic is Wieslaw Caban. The second research, on the history of the society and the Russian administration in the Polish Kingdom and western provinces, was initiated and carried out by Stanislaw Wiech. And the problem of russification of the educational system is the domain of Adam Massalski. The researches on Polish–Russian relations in the 19th century, carried out at the Institute of History of Jan Kochanowski University, were conducted in a close cooperation with Russian historians. The results of these studies were presented at several international conferences organized in Poland (Warsaw, Kielce, Krakow) and Russia (Moscow, St. Petersburg, Rostov Veliky Novgorod, Nizhny Novgorod, Ryazan, Krasnodar, Omsk, Tomsk, Barnaul). Overall, the historians from Kielce devoted dozens of monographs, several compact source publications and more than one hundred treatises and articles to the problems of the Russian topics. 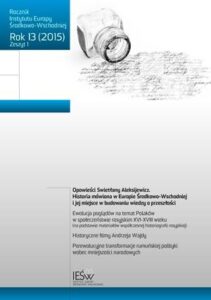