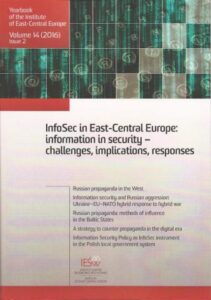 Russian propaganda in the West

Yuriy Zaliznyak
Liczba wyświetleń: 46
In this contribution, information security and hybrid war are examined through the media terrain of modern conflict between Russia and other nations. This paper explores common instances of reaction to Russian information aggression against Ukraine, the European Union and other countries. In their battle for public opinion in Russia itself, Europe and overseas, state-controlled Russian media employ well known or new methods of propaganda. Russian agents of influence work not only at RT Channel worldwide but can also make the respected media in the United Kingdom, France or other countries publish Russian spin-doctors’ messages. The internet has also become a battlefield for Russian trolls and hackers. The common ways of responding to these challenges by Ukraine and other East-Central European countries are examined and discussed to identify their weaknesses.

Russian propaganda: methods of influence in the Baltic States

Aleksandra Kuczyńska-Zonik
Liczba wyświetleń: 47
The objective of this paper is to examine the methods by means of which Russia seeks to influence the Baltic countries. The analysis pertains to the countries where Russian propaganda messages may pose a potential threat due to Russian-speaking minorities in those countries. An attempt has been made to answer the following research questions: 1) how do the authorities create and control the message; 2) what are the methods of persuasive actions and 3) what are the ways of counteracting propaganda. It is claimed that Russian propaganda strongly affects recipients’ emotions, disinforms and has a negative influence on rational decision-making processes. It is vertical since the way of conveying information is carefully designed, top-down programmed and has long-term effects. Confusion and informational chaos are created through persuasion, suggestion and manipulation, strengthening the status quo of the current authority, supporting local authorities and limiting possibilities for the growth of new political elites. Based on the analysis of Russian propaganda, a few conclusions and recommendations have been drawn.

A strategy to counter propaganda in the digital era

Richard Hornik
Liczba wyświetleń: 41
Until recently, the concept of Information Security (InfoSec) had been thought to apply primarily to threats against the information systems which monitor and control key aspects of public life. It is now clear that InfoSec also involves defending societies against efforts to distort and pervert public opinion. The ability of state and non-state actors to affect public opinion in open societies has been greatly enhanced by advances in the communications technologies of the 21st century. Social media in particular have proven to be effective in this regard, as has been demonstrated by the success of Islamic terrorist groups in recruiting unwitting citizens in the US and Europe. Traditional responses to propaganda such as refuting it or creating counter-narratives have proven thus far to be ineffective. Instead, this paper argues that open societies must inoculate their citizens against misinformation and disinformation by encouraging the development of their critical thinking skills.

Łukasz Wojciechowski
Liczba wyświetleń: 51
This article discusses Information Security Policy (ISP) as an instrument of maintaining information security (InfoSec) in Poland at the local government level. In line with the existing legal framework, all local government units must prepare and implement a document titled ‘Information Security Policy’ (ISP). Resulting from a landmark law, i.e. the Act on Personal Data Protection of 29 August 1997, the ISP determines the data sets, the range of their processing as well as basic mechanisms of their protection. Another important source of law in the field of InfoSec in Poland is a 2004 Regulation on Personal Data Processing Documentation (RMIA) that sets out details that apply to individual institutions and define the technical conditions of the equipment and systems used for the processing of personal data. That regulation proved fundamental for the development of contemporary InfoSec in Poland. Appropriate security policy in local government units may protect them from cyberattacks at various levels and hence provide Polish citizens with InfoSec. However, the introduction of appropriate procedures faces many challenges. They may result not only from the lack of qualifications on the part of officials processing the data but also from scarce financial resources necessary for the implementation of relevant procedures.

Daniel J. Lemmen
Liczba wyświetleń: 52
Today, Europe faces serious political and economic challenges and problems many of which still await to be recognized. The objective of this paper is to examine three developments that might turn into challenges and affect the Polish-German relations in the near future. If unaddressed promptly, they might lead to a new caesura between Berlin and Warsaw. These developments include: first, the return of the so-called German Question and a debate about Germany’s role in Europe, which from a historical but also geopolitical point of view has always had a significant influence on Poland. Second, there is a comeback of the idea of the Intermarium (Międzymorze). We see a cooperation between East-Central European states, which some experts discuss as an alternative for Polish foreign policy. Last but not least, Russia has returned to its traditionally central factor shaping politics in the region. A “Russo-German romance”1 would have serious consequences for the Polish- German relations.

The core-periphery divide in the EU transformation crisis: challenges to the Visegrád Four

Attila Ágh
Liczba wyświetleń: 45
This paper outlines the impact of the Eurozone crisis and the ‘dual crisis’, i.e. the Ukrainian and the refugee crisis, on the New EU Member States (NMS) in general and on the Visegrád Group countries (V4) in particular. The negative differentiated integration of the NMS that dangerously diverge from the mainstream European developments is emphasized. It is argued that the global financial crisis intensified the core-periphery divide in the EU. As a result, a new form of regional divergence emerged, whereby the NMS alienated from the EU’s core. Since, following the global financial crisis, the EU focused on problems in the Eurozone, problems in the EU’s eastern periphery were marginalized. Overall, today, the danger is that a regional ‘Unholy Alliance’ or ‘Authoritarian International’ might emerge in the V4 as a result of increasing divergence within the EU.