Sposób cytowania: M. Proczek, J. Surała, ‘The Council of Europe Development Bank and its Activities in the Context of Global Public Goods’, Yearbook of the Institute of East-Central Europe, Vol. 15, No. 4, 2017, pp. 47-68.

Abstrakt: In its activity, the Council of Europe Development Bank (CEB) is particularly obliged to consider the social and environmental impacts of its actions aimed, in principle, at improving the living conditions of communi-ties and supporting their sustainable development, as well as at reducing the social costs of market failure and combating social exclusion. The Bank pro-vides support to projects prioritizing European cohesion in the fields of law, human rights protection, access to education, common cultural heritage and protecting the natural environment. Its activities are directed at the protec-tion and management of global public goods to be widely used by nations, states, civilizations and generations. In view of that, this paper presents the CEB as a multilateral development bank with an exclusively social mandate, and as an organization which does not only uphold and manage global pub-lic goods but also constitutes a global public good itself. The objective of this paper is to examine the functioning of the CEB from the perspective of global public goods. The paper describes the Bank (its origins, objectives, structure, funding, core activity and instruments) with special focus on its current activi-ties, then assesses these activities through the lens of the debate on global public goods. This paper argues, on the one hand, that the CEB as an effective guardian, provider and manager of global public goods generates added val-ue on both the national and international levels by pursuing socially-oriented projects in individual states and supporting multi-country social agendas, es-pecially in Central, Eastern and South-Eastern Europe. On the other hand, it presents the CEB as a global public good in sensu stricto, depicting it as a mar-ket leader and professional expert in the social banking field, and as a body that is not only a flexible lender responding to the needs of borrowers but also a trend setter shaping social capital markets. 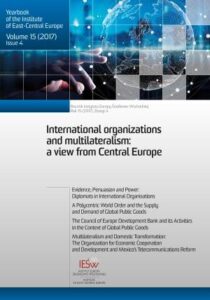