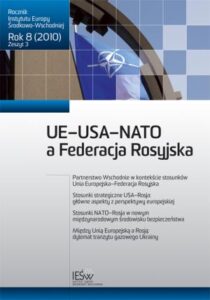 Tomasz Kapuśniak
Liczba wyświetleń: 288
The Eastern Partnership in the context of relations between the European Union and the Russian Federation

Katarzyna Pisarska
Liczba wyświetleń: 265
The article investigates the evolution of the EU relations with the Russian Federation before and after the 2004 enlargement. By comparing the approach of the EU in the 1990s and the first decade of the 21st century, the author finds that there has been a substantial quantitative and qualitative change in the bilateral relations with Russia. This change is a direct result of three important factors. Firstly, the physical extension of the European Union’s border to the East has made the EU face a new set of problems (visa issues, transit, border control) demanding a closer and a more intense cooperation with the Russian Federation. It has also forced the EU to differentiate its relations with other new EU neighbours such as Ukraine and Belarus. Secondly, the accession of new member states from Central Europe has brought new sensitivities into the EU and a strong lobbying group demanding a more direct EU involvement in its Eastern neighborhood and a more coherent policy toward Russia. Thirdly, the aggravation of Russia’s foreign policy rhetoric and its actions undertaken in the post-Soviet space in the years 2004-2009 has made all EU member states more aware of the necessity to find common ground in their dealing with Russia. All these factors have contributed to a shift in the EU policy towards the Russian Federation after 2004 characterized mainly by a more realistic approach and attempts to counteract the Russian “divide et impera” tactics based on breaking up the European solidarity.

Piotr Ostaszewski
Liczba wyświetleń: 259
The article is mainly focused on the position of Ukraine as the transit country for the Russian natural gas. The major problem is the Ukrainian position and sovereignty, how it could be maintained between Russia and the European Union. The author is convinced that the new president Victor Janukovytsch faces the question of how to combine the Russian political and economic pressure with European investment. This would guarantee the Ukrainian balance of power in its territory which might positively affect its position.

Marcin Kaczmarski
Liczba wyświetleń: 260
Both Russia and the EU demonstrate aspirations to shape the international order at the global scale. However, their respective visions differ significantly. The EU, itself creating regional international society, aspires to influence the global order in its own mould. Russia at the same time is predominantly pluralist, although with selected solidarist features. The article seeks to upgrade the Russian–EU relationship to the global level, by the way of analysing how both actors attempt to reconcile their respective visions of IS and what are the possible consequences for global IS. To study the issue, major post-Iraq international crises (Iranian, Middle Eastern, Kosovo) are chosen as case studies. The selected crises touch upon crucial issues for the IS: the use of force, the non-intervention principle, human rights causes, the application of sanctions and the inclusion-exclusion issue. The article aims to look at the ways in wchich both actors define their scope of common interests, reinterpret and construct the rules of global IS, and to what extent they are able to influence the emerging global order.

Marek Czajkowski
Liczba wyświetleń: 255
The strategic issues play an important role in the US-Russian relations. This is partly because of history, partly due to current interest. This article discusses two perspectives, important from a European point of view – one is doctrinal and concerns the conceptual basis of the strategic relations, the other is real and deals with certain issues. When it comes to the doctrine, it is worth noting that, from a Russian standpoint, main strategic problems play a more important role than for the American party. That is because strategic issues, especially nuclear weapons are just one field where Russia holds some balance with the US, while remaining inferior in all of the other spheres of the relations. In fact, and according to the US doctrine, Russia is not equal to the US and there are more important problems of American security policy and other important partners such as Europe, China or India. In American eyes only nuclear disarmament and proliferation raise Russia’s value above the others. The certain issues, addressed in this article are: nuclear disarmament and missile defence. It is argued that while strategic disarmament remains the goal for both sides, although for different reasons, tactical nuclear weapons will be much harder to reduce. When it comes to missile defence it must be noted that it is quite crucial for the US to gain at least some defensive capability against limited missile strikes; this serves the key American interest in the world, and will gain even further importance in the future. On the other hand, the creation of the BMDS may deprive Russia of some regional leverage, and may affect Russian prestige because there will be no eastern counterpart to the US missile defence.

Dominik Jankowski
Liczba wyświetleń: 296
The aim of this article is to provide a broad discussion on the NATO-Russian relationship through the lens of the recent events as well as some official documents. Indeed, NATO-Russia relations still undergo a recalibrating process. There are, therefore, two crucial issues to be analysed. First, is Russia ready to face together with NATO the new type of ever-evolving challenges and threats? Second, is NATO prepared to forge a long-lasting consensus on a common stance towards Russia, which could be labelled in short as engagement and reassurance?