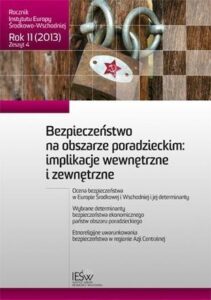 Dorota Niedziółka
Liczba wyświetleń: 263
Today Post-Soviet states are facing changes to the existing terms of providing energy security. The disintegration of the Soviet Union area resulted in their need to make their own decisions about the sources and directions of supplies of energy resources and the implementation of a new infrastructure investments. At the same time, post-Soviet neighbour states seek partners for the implementation of joint energy projects. They are aimed at reducing the dependence on Russian oil and natural gas. This article focuses on identifying trends and determinants of changes in the energy security of the post-Soviet area states.

Krzysztof Falkowski
Liczba wyświetleń: 244
At a time of a more and more globalized world economy, developing liberalization of international economic relations and also internationalization of business activities (including the growing role of transitional corporations), the issue of economic security is becoming increasingly important. This has also lead to redefi ning of the traditional functions of the state. The main aim of this article is to discuss selected factors which according to the author determine the level of economic security in the post-Soviet states at the greatest level. The level of economic security in the post-Soviet states is diverse; determined by a variety of diff erent factors with diff ering weights of infl uence. There are both endogenous as well as exogenous factors, and special attention to the role of Russia should be paid in regard to the latter.

Piotr Bryliński
Liczba wyświetleń: 240
At the end of 1991, an event unprecedented in the history of the modern world occurred – one of the two superpowers whose grappling shaped the post-war history of the world collapsed. The Russian Federation that emerged after the dissolution of the Union of Soviet Socialist Republics was soon facing the need to defi ne its identity, position and role in the post- Cold War international environment. Interestingly, the highly complicated and multidimensional identifi cation process not only failed to resolve the dilemma regarding the true Russian identity, of great import to the Russian state, its citizens and the world, but was never fully accomplished. It seems that the modern- day Russia fi nds it extremely diffi cult to provide a straightforward answer to the question of what it is and what its goals and interests are. However, upon analyzing the more than twenty-year-long period of transformation which the USSR’s successor has undergone, it has to be noticed that Russia has discovered an integral and, more importantly, durable and fi rm component of its identity, of particular signifi cance to its international relations, namely the Russian hydrocarbons. Although it is only a small part of the multi-faceted and equivocal Russian “I” (both in its internal and external aspect), it seems a perfect reference point for the Russian Federation, a sort of axiom in the exceedingly diffi cult process of self-perception with regard to its role and place in the post- Cold War structure of the global balance of powers.

Agnieszka Legucka
Liczba wyświetleń: 247
The aim of this article is to analyze four of the Post-Soviet confl icts which are not yet ended, and which are referred to by same authors as “frozen conflicts”. After 20 years, chances to find sustainable settlement to prolonged confl icts in the South Caucasus and Moldova have not improved considerably. The existence of quasi-states such as Abkhazia, South Ossetia, Nagorno-Karabakh and Transnistria on the territory of Georgia, Azerbaijan and Moldova is dangerous for the security in the Eurasian region. Frozen conflicts are the phenomena occurring in the Post-Soviet area. These conflicts became Russia’s geopolitical instruments of her foreign policy towards the Post-Soviet countries to help her build her own space of influence. Another function of frozen confl icts is to consolidate people around the political elite of Georgia, Azerbaijan and Moldova, usually against a common external enemy. In this aspect the process of defrosting confl icts means the possibility of changing the status quo of those quasi-states, i.e. Abkhazia, South Ossetia, Nagorno-Karabakh and Transnistria.

Andrzej Gil
Liczba wyświetleń: 242
The region of Central Asia is usually identified with five post-Soviet republics, now independent states: Kazakhstan, Tajikistan, Turkmenistan and Uzbekistan. However, it seems that if one bears in mind all the implications of this fact, the most proper way to approach it is not in the context of contemporary borders, external or internal, but rather by taking into consideration all the conditions which stem from the complex history of this part of the continent. From this point of view, the region of Central Asia should be regarded within a much wider scope than just that of the said five states. The contemporary border lines are the outcome of a relatively recent decisions connected with the implementation of the Soviet ethnic policy after the USRR was constituted in the 1920’s and 1930’s, and it is difficult to treat them as completely stable and representing any real internal bonds, ethnic, economic or social. It is likely that the shapes of the border lines between those five countries are not yet final and that they may be altered in the future. These countries are surrounded with a kind of buffer zone, so it is safe to assume that, in reality, the region of Central Asia spreads much further. When considering the issue of ethnoreligious conditions of the Central Asia’s security, we shall concentrate on those five post-Soviet republics, bearing in mind that it requires a rather broad look, including all the regional factors.

Katarzyna Żukrowska
Liczba wyświetleń: 228
The article gives an overview, as well as a comparison, of the determinants of security in four states of Central and Eastern Europe, i.e.: Czech Republic, Hungary, Poland and Slovakia. The evaluation of security is based on economic features and principles and includes also the terrorist threat. The main assumption of this article is that in military and political areas the four states represent a similar and relatively limited security risk. The main diff erences occur in the fi eld of economics. The countries represent diff erent abilities to adjust eff ectively to the new challenges of the changing world. This can be considered as a threat to the political stabilization as well as the ability to meet social expectations of the citizens. The existing gap between those expectations and the ability to meet them, as well as limited results in fulfi lling the promises defi ned in election campaigns, can seriously determine the local conditions of security and undermine the political stability in medium run. The article argues that the countries in this region seem to have been labeled, but often on the basis wrong evaluations.

Rafał Riedel
Liczba wyświetleń: 241
Liberalisation of energy markets, often wrongly understood as deregulation, has its own specifics, important from the analytical point of view. Implying the competition pressure on a specific market does not need to imply deregulation. Some markets require more and some less regulation, which does not necessarily mean resignation from free market rules. Standing to some principles, like for example: non-discrimination, equal competition rules, or equal access to resources, may result in a competitive, though highly regulated, market. In this text, the author puts into consideration the energy market on which energy production is treated as a commercial operation, whereas energy transmission and distribution as a strategic sphere which should be disconnected from market games. This issue is crucially important from the point of view of the post-Soviet economies of Central and Eastern Europe. Energy sectors from this region vary distinctively, ranging from state monopolies, through oligopolies, to the more pluralistic market structures. This text provides and discusses the main determinants which should be taken into account in the process of energy market liberalization.