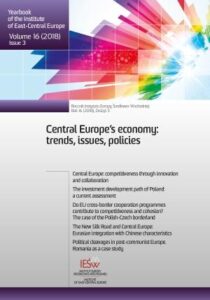 The investment development path of Poland: a current assessment

Marian Gorynia | Jan Nowak | Piotr Trąpczyński and Radosław Wolniak
Liczba wyświetleń: 119
This paper explores the concept of investment development path (IDP) as applied to Poland as the economy of Central and Eastern Europe (CEE). Specifically, the objective of the study is to evaluate Poland’s current positioning and, hence, stage of development. The paper begins with a brief literature review devoted to the concept of IDP. It is followed by a review of extant research applying the IDP model to CEE economies. Analysis of macroeconomic data indicating Poland’s IDP path follows. The main conclusion is that Poland is at the end of stage 2 of its IDP, i.e. it is behind the position that its GDP level would imply. This is mainly due to the pull of the large internal market, the still weak competitiveness of domestic firms in international markets and the reluctance of government to adopt more active, firm specific ownership advantage stimulating policies towards outward FDI.

Do EU cross-border cooperation programmes contribute to competitiveness and cohesion? The case of the Polish-Czech borderland

Małgorzata Dziembała
Liczba wyświetleń: 107
The competitive potential of individual regions varies, but frontier regions in each member state are in a significantly worse situation because their development is uneven, which stems in part from their diverse abilities to adapt to the changes that take place in their surroundings. The development of these cross-border territories is supported under cohesion policy. The objective of the paper is to discuss how to boost the competitiveness of cross-border areas and to present the role of cross-border cooperation programmes in supporting competitiveness and cohesion in 2004-2020 based on the example of programmes implemented on the Polish-Czech border and co-financed from EU funds. The analysis of the implementation of European cross-border programmes pertaining to the Polish-Czech borderland has indicated that the measurable outcomes of the support that was provided manifested themselves in many areas, particularly in education, the environment, transportation, and culture. In the analysed programming periods, the directions for support granted under the cross-border programmes have been slightly modified. In the 2014-2020 programming period, a stronger emphasis is placed on support of employment growth through the use of the cultural and natural potential of these areas, risk-related issues, entrepreneurship, education, and the development of a cooperation network.

Małgorzata Dziembała, ‘Do EU cross-border cooperation programmes contribute to competitiveness and cohesion? The case of the Polish-Czech borderland’, Yearbook of the Institute of East-Central Europe, Vol. 16, No. 3, 2018, pp. 39-67.
Artykuł

Andrzej J. Żuk
Liczba wyświetleń: 110
Integration processes in the European Union (EU) do not only concern the member states, but also their regions, including areas bordering other EU countries. The aim of the paper is to present the conception of crossborder region (CBR), which refers to the processes of cross-border integration (CBI) of EU border regions. CBR is considered from three points of view. Firstly, its institutional dimension is presented, emphasising the special importance of cross-border multi-level governance through its organisational structure in the form of cross-border management institution (CBMI). Secondly, the relational dimension of CBR, which includes relations, ties and cross-border networks, is analysed. Thirdly, the economic dimension of CBR is introduced, showing possible strategies for its development of exo- and endogenous character. Special attention is paid to various types of pro-innovation policies in CBRs. At the end, the meaning of the CBR conception is presented and the main conditions for creating CBRs in the EU borderlands are indicated, the most important being the future of the European integration project.

Andrzej J. Żuk, ‘Towards cross-border integration of border regions in the European Union: the conception of cross-border region’, Yearbook of the Institute of East-Central Europe, Vol. 16, No. 3, 2018, pp. 69-92.
Artykuł

Barriers to the implementation of financial instruments under cohesion policy

Agnieszka Kłos, ‘Barriers to the implementation of financial instruments under cohesion policy’, Yearbook of the Institute of East-Central Europe, Vol. 16, No. 3, 2018, pp. 93-115.
Artykuł

Marjan Sternad and Gorazd Justinek
Liczba wyświetleń: 105
Logistics became an area in which the local organizations needed to achieve a competitive advantage against overseas organizations so that they could offer reliable and responsible servicing on the market. On the other hand, entering foreign markets entailed longer, costlier and more complex operations. Good management of logistics processes, therefore, was the tool for the achievement of global opportunities. In recent years, the importance and role of procurement have changed significantly. Procurement has become an important business function. Efficient business operations are not only important for an individual company but for the entire national economy and the society as a whole, as prosperity depends on the business performance of companies. In the paper, we show the importance of purchase and distribution logistics for international trade. The following paper also analyses logistical obstacles when operating in international markets. We found out, that internationalization still represents an obstacle for many companies with several years of experience, especially in the field of logistics.

Krzysztof Kozłowski
Liczba wyświetleń: 109
People’s Republic of China’s idea of Eurasian Integration, commonly dubbed Belt and Road initiative, is perceived as both an opportunity and a challenge for the East and Central Europe. While analyzing the execution of the Chinese regional integration policies one can identify the major motifs of Chinese rise and development, the bilateral and multilateral patterns of interaction with international actors, and the evolving Chinese attitude toward global Powers as well as toward developing states. At first, it was welcomed with open arms by many actors. However, as the time passes by, the disappointing inertia in relations between PRC and the region, as well as disturbing similarities in patterns of the Middle Kingdom relations with other parts of the World, provoke questions over the true nature of Chinese engagement with Eastern flank of EU. The paper aims to place the Chinese policies referring to Central Europe within a broader pattern of Chinese regional cooperation policies. Despite the rapid diversification of PRC regional engagement in different parts of the Globe, the scheme employed by the Middle Kingdom remains relatively similar in most of the cases, both in terms of opportunities and limitations.

Political cleavages in post-communist Europe. Romania as a case study

Cristina Matiuta
Liczba wyświetleń: 124
The concept of cleavage, as it was theorized by Stein Rokkan in the late 1960s, sends to a deep and lasting division between groups, based on a certain type of conflict. It links the individual behaviour to macro-historical processes that will shape the political field for decades. A controversial issue is the application of the Western Europe-specific cleavages, where national and industrial revolutions have produced profound transformations with a lasting impact on party systems, outside this area. By focusing on the Romanian case, the paper explores the cleavages before the establishment of communism and those emerged after its collapse, results of this regime and/or of the process of transition to democracy. The adopted perspective is to use Rokkan’s typology as a reference point, to analyze the extent to which it has descriptive capacity for the Romanian space, and even if losing the rigor of definition, to refer to the tensions and divisions which, although not necessarily leading to the emergence of political parties, have the potential to shape the political action.

Miklós Somai
Liczba wyświetleń: 107
The objective of this paper is to examine why the French economy, having done quite well during the period of global financial crisis, has been unable to head off to the path of sound economic growth again, while at the same time the German economy, by European standards, has been flourishing. Is it related to the specificities of French capitalism (centralisation, rigidities, delays in structural reforms, etc.) or some EU policies (pre-eminently the monetary one) are to blame? A thorough examination of this issue is of the utmost importance considering that a permanent shift in the balance of power between France and Germany might prove detrimental to the European integration process at large.

Book review: Central and Eastern Europe in the EU: Challenges and Perspectives Under Crisis Conditions by Christian Schweiger and Anna Visvizi (eds)