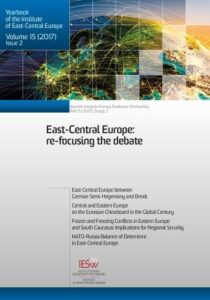 Christian Schweiger
Liczba wyświetleń: 63
The paper examines the prospects for the East-Central region in the European Union (EU) in terms of their ability to actively contribute towards the EU’s policy agenda given Germany’s current dominant position and the forthcoming British exit from the EU (Brexit). The East-Central member states have struggled to emerge from the predominantly passive policy-taker position they adopted after EU accession towards a more active role. The paper examines to what extent this ambition is undermined by the trend towards democratic backsliding in the region and the more recent positioning of the Visegrad Group (V4) in opposition to their traditional close ally Germany.

Colette Mazzucelli | Paul C. Saunders | Ma Zijian
Liczba wyświetleń: 57
This article focuses on the present shift of global power eastward and the significance of this evolution for Central and Eastern Europe (CEE) in terms of an emerging multipolarity in the international relations of the 21st century. The analysis underlines China’s geopolitical interests in the CEE region, notably, the Belt and Road Initiative (BRI), as well as the resurgence of American isolationism under the administration of President Donald Trump. As two active geostrategic players, Russia and China, jockey for position, the expansion of Chinese investment westward to CEE states occurs at a time of nationalist-populist challenges to democracy from the far right of the political spectrum in the member states of the European Union (EU). The much-needed funding offered for infrastructure projects in CEE countries has a positive developmental impact, and yet in an area struggling with the legacy of Soviet communism, the spread of Chinese influence is likely to conflict with the forces of liberal democracy. The potential for an ideological clash is significant as the EU struggles to identify a 21st century narrative that captures the imagination of citizens across the continent, especially those in the younger generations without the experience or recollection of the post-World War II era.

Illiberal Relations: The Individual, the State and the Dignity of Communities under the Hungarian and Slovak Constitutions

János Fiala-Butora | András L. Pap
Liczba wyświetleń: 91
The paper focuses on the conceptualization of personhood and constitutionally protected groups, as well as the relationship between the individual and the state, in particular the ethno-cultural majority in two European Union (EU) member states showing illiberal tendencies, Hungary and Slovakia. The authors show how in Hungary, the recognition of individual dignity is conditional on membership in the (most often majority) community, and it is the dignity of communities—not exclusively but including that of the ethnic majority community—that is protected by the new constitution. The Slovak case study focuses on the protection of the Slovak language as a form of protecting the Slovak nation. The analysis shows how a constitutional order considering majority identities its highest value is undermining the protection of fundamental rights in the long run. In this sense, the Slovak example shows what the Hungarian illiberal1 turn can lead to.

Agnieszka Legucka
Liczba wyświetleń: 60
The paper focuses on the process of frozen or freezing conflicts in the post-Soviet area and how they influence regional security in Eastern Europe and South Caucasus. The key argument advanced is that the almost three-year-long war in eastern Ukraine (Donbas) will become another frozen conflict in the post-Soviet space. The reasons for this are the lack of agreement between Ukraine and Russia on the future of the region and Russia’s support for the Donbas administration. The main consequences of those conflicts are destabilization, devastation and militarization of Eastern Europe. Russia has experience leveraging conflicts of this type and using them to further its foreign and security policy aims. Georgia, Azerbaijan, Armenia, Moldova and Ukraine are affected by the problem of frozen conflicts, which influence their internal political, economic and social situation.

A. Legucka, ‘Frozen and Freezing Conflicts in Eastern Europe and South Caucasus: Implications for Regional Security’, Yearbook of the Institute of East-Central Europe, Vol. 15, No. 2, 2017, pp. 79-97.
Artykuł

Rafał Wiśniewski
Liczba wyświetleń: 66
This paper aims to analyze a crucial feature of East-Central Europe’s (ECE) security environment—the balance of deterrence in NATO-Russia relations. This particular factor is the most influential among all on the regional order in the ECE. It stems from the fact that the Russian Federation is the preponderant military power in the region. The fear of possible Russian belligerence was the number one factor behind the desire of many countries in the region to join the Alliance. As a result, Russia and NATO constitute the most important actors in the regional security order in the ECE, a reality made even starker in the wake of the Ukraine crisis. Since that began, the Russia-NATO relationship has turned antagonistic. As open military conflict has (for now) been precluded as an option by both sides, it is the balance of deterrence between them that drives the evolution of ECE security. This paper first establishes an understanding of what constitutes the balance of deterrence and which factors are most important for it. Then, it assesses the current balance by identifying both sides’ aims and strategies. Finally, a picture of the impact of the balance on regional security emerges.

Drones in War: The Controversies Surrounding the United States’ Expanded Use of Drones and the European Union’s Disengagement

Emanuel G. Boussios | Anna Visvizi
Liczba wyświetleń: 59
The administration of President Donald Trump has embarked on a mission to redefine the guidelines for the deployment of drones, thereby altering significantly the policy set by his predecessor. Though early in Trump’s presidency, his administration has failed to establish a clear doctrine on the use of drones for military use. By creating such a doctrine, the United States (US) as a military behemoth would have the opportunity to set the terms of the debate and create the necessary international attention and cooperation on establishing universal guidelines on drone warfare. Other major powers, most notably the European Union (EU), have lagged the US on this issue. By reference to the lessons drawn from the US engagement with armed drones, this paper sheds light on key issues that will inform the debate on the international armed drone use regime. It then queries the prospects of the EU and its member states joining the efforts geared toward establishing internationally recognized armed drone use regime. Recommendations on how the US and the EU could collaborate in this domain follow.

E.G. Boussios, A. Visvizi, ‘Drones in War: The Controversies Surrounding the United States’ Expanded Use of Drones and the European Union’s Disengagement’, Yearbook of the Institute of East-Central Europe, Vol. 15, No. 2, 2017, pp. 123-145.
Artykuł

Warsaw on the Way to Kerneuropa? Germany as Poland’s Bridge to the EU’s Center

Daniel J. Lemmen
Liczba wyświetleń: 64
Against the backdrop of shifting geopolitical and geostrategic considerations shaping the increasingly multi-speed European Union (EU), this paper examines the prospect of possible future closer cooperation between Poland and Germany. It is argued that a deeper German-Polish alliance in the EU could hinder the process of Warsaw being pushed to the political periphery of the Union. By focusing on Berlin, Poland could use it as a bridge to Kerneuropa, or the core of the EU. An alternative this article considers is the prospect of Poland enhancing its ties in Central and Eastern Europe (CEE), and especially with the Visegrad Group (V4) of countries. In this scenario, the V4 might want to counterbalance German dominance in Europe.

From Mitterand to Macron: Tracing the Evolution of French-Polish Relations

Agata Stolarz
Liczba wyświetleń: 58
The first months of Emmanuel Macron’s presidency have shown that one of his goals is to rebuild France’s position on the international stage. Macron also seeks to promote several reforms at the EU level geared towards deepening European integration. Presumably, Macron’s policy objectives will impact Central Europe, including Poland. This paper provides a general overview of the Franco-Polish relationship over the period 1989-2017. Against this background, the paper will discuss the main challenges in the Franco-Polish cooperation since the fall of the Berlin Wall through the first three months of Macron’s presidency (2017).

De-Europeanization and De-Democratization in the EU and Its Neighborhood

Adam Szymański
Liczba wyświetleń: 57
The European Union’s (EU) impact on the political systems of its member states as well as countries within enlargement and neighborhood policy has been broadly analyzed, particularly in the context of the democratization process. However, there have been some political changes in recent years that justify the question of whether we still can talk about the continuation of Europeanization and democratization or have started to observe a disruption of these processes, or even their reversal. The main goal of this paper is to analyze the relationship between the phenomena of de-Europeanization and de-democratization, looking at the current political changes in selected “new” member states or candidates for EU membership (Hungary, Poland, and Turkey) to better understand the core problems of their democratization processes and, at the same time, the obstacles to effective Europeanization.

Belen Presas Mata
Liczba wyświetleń: 53
The objective of this paper is to examine the relationship between connectivity, considered how we make the most of geography, and nationalism, the long-lasting challenge that Europe has always faced. This paper considers that the process of integration in the European Union (EU) is no longer happening through nations, but through super regions—functionally connected entities that share key infrastructure, even when there is no clear geographical distinction. As these connections gain importance, nationalism decreases in strength. The first section provides an overview of nationalism in Europe, citing some current examples and relating it to the lack of a European identity. The second section defines the idea and extension of super regions and, using the core-periphery theory, explains “multi-speed” Europe. The next part will be devoted to the concept and implications of connectivity and the role of communication and data in cross-border flows. The last part draws a general picture of a Europe of super regions.

B. Presas Mata, ‘Overcoming Divides in the Contemporary EU: “Connectivity”, Political Geography and Super Regions’, Yearbook of the Institute of East-Central Europe, Vol. 15, No. 2, 2017, pp. 213-232.