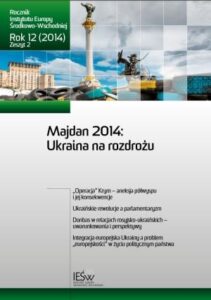 Ryszard Radzik
Liczba wyświetleń: 277
The article is focused on the attitudes of the Belarusian society towards the events on the Ukrainian Maidan in 2014 and, to some extent, on the official policy of the Belarusian administration of President Alexander Lukashenka. Based mainly on sociological surveys conducted by independent research centres, an interpretation of these attitudes considers the historical and cultural background of the country, as well as its social structure and mentality. A Pro-Russian perspective in Belarus which is critical of the Maidan events and the new Kiev authorities, and accepts the Russian annexation of the Crimea and the military intervention in eastern Ukraine, is clearly more visible in 2014 than it was in the case of the much more peaceful Orange Revolution of 2004. One of the main factors at play is that Belarusians distance themselves from the idea of resorting to violence and the use of military force in the current crisis, and put the blame on the Ukrainian side. It turns out that Belarusians are greatly influenced by Russian TV stations and their utterly onesided approach and pro-Donbas separatist bias. As Lukashenka has not made any effort to build a consolidated national community, at the time of crisis Belarusians, in their hope for being spared the Ukrainian fate, are much more inclined to integrate with Russia than with the European Union. Lukaskenka, however, is aware of the fact that once the Ukrainian crisis is over, Russia can exert more pressure to integrate with Belarus, which would be a major threat to his power (and which might not be strongly opposed in the country). Under such circumstances, he is trying to be more independent in his relations with Russia and, to a certain extent, giving verbal support to the new Ukrainian leadership and their vision of the country within its established borders. Considering that Belarus is greatly dependent on Russia, both economically and politically, Lukashenka’s options are rather limited and he cannot really assume a major role in the game.

Piotr Bajor
Liczba wyświetleń: 319
Studies presented in this paper are connected with the annexation of Crimea, which was carried out by Russia after the change of authorities in Kiev at the beginning of 2014. The author has examined key decisions and effects of this process and their geopolitical consequences.

Tomasz Stępniewski
Liczba wyświetleń: 320
The main aim of the study is to discuss the crucial moments in the formation of the Ukrainian political system which have affected the present situation of the country. By analysing historical, political, economic and cultural aspects of the problem, remnants of the Soviet times, which continue to shape the political system of the modern-day Ukraine, have been brought to light. Despite the progressing process of democratisation, no sufficient or decisive steps have been taken towards reconstructing the system and creating an entirely new political reality. State institutions dating back to the times of the USSR have not been reformed, nor decommunized, which represents another challenge to the future of the state.

Andrzej Szeptycki
Liczba wyświetleń: 265
The article addresses an important issue of the presence of a Jewish community in the contemporary political and social life of Ukraine, particularly in the context of the latest changes in the country. The author concludes with pointing to a noticeable change in the way the Jewish citizens are perceived by other Ukrainians, and stresses a strong connection between the changes in the state and the social/political activity of the Jewish community and its absolute support for the pro-West plans for the future of Ukraine.

Andrzej Gil
Liczba wyświetleń: 335
The Donbas region (or the Donets Basin) is regarded as Ukraine’s major problem, both in the context of its internal (separatisms) as well as international situation (relations with the Russian Federation). The purpose of this article is to draw attention to the potential role of Donbas as a borderland zone, a link between Ukraine and Russia. An analogy could be used here of the French regions of Alsace and Lorraine as a bridge which not only helped reconcile France and Germany but also became the basis for European integration.

Włodzimierz Osadczy
Liczba wyświetleń: 315
The aim of the study is to show the circumstances of the situation in Ukraine and their influence on the process of integration of Ukraine with the European Union. At the end of 2003 and the beginning of 2004, a political crisis began in Ukraine, which brought the problem of the Europeanism of that state and its prospects for integration with Europe up for discussion. The entire protest action was steeped in pro-European rhetoric. The venue of the civil unrest was called Euromaidan, or a “revolution of values”, as the protesters motivated their actions by a desire for a European chance for Ukraine. The most immediate reason that sparked the rebellion was an unrealized association agreement with the European Union which the then Ukrainian authorities had promised but failed to sign.