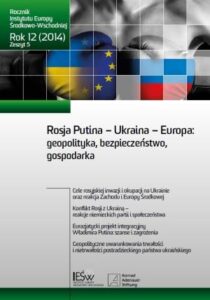 Tomasz Stępniewski
Liczba wyświetleń: 103
The paper is an attempt to show how the operations of modern Russia on the international arena aim at restoring the status quo ante, as shown in the example of the war with Ukraine. In the 1990s, we witnessed a weakening of the international position of Russia – the successor to the USSR. In the 21st century, on the other hand, Russia’s policy towards its neighbours, and in the future perhaps also more distant countries, has become aggressively driven by imperialistic goals. From the very beginning of the Russian-Ukrainian conflict (a hybrid war, or a subliminal war), Russia’s aim was to destabilise the situation in southern and eastern Ukraine in order to disconnect these areas from the country or to turn them into occupied territories, or establish a quasistate there. This occurring in the immediate vicinity of the V4 states, it would directly affect the security of those countries as well. A properly coordinated, comprehensive action needs to be taken by the EU, involving measures of peacekeeping, monitoring, state-building as well as financial and humanitarian aid with the strategic aim to stabilise the situation in Ukraine.

Klaus Ziemer
Liczba wyświetleń: 81
The article presents the reactions in Germany to the annexation of the Crimea by Russia. This event made it clear that the long-term German policy towards Russia had failed. This policy tried to contribute to Russia’s modernization by economic cooperation which was to enhance also the development of the country towards democracy and rule of law. In the new political situation German economy is trying to maintain economic relations with Russia, but is also respecting the sanctions of the European Union. The leading media are very critical towards Russia’s behaviour and report also on the media offensive of Russian propaganda. Public opinion polls show growing distrust towards Russia in German society and growing support for NATO and EU. The positions of political parties are pretty clear. The post-communist Left shows much understanding for Putin’s position. The new populist Alternative for Germany even wants to resume elements of Bismarck’s policy towards Russia. From the very beginning of the Ukraine conflict, the Greens have severely criticized breaking of the international law by Russia. The governing parties CDU/CSU and SPD, in vast majority, have been criticizing Russia’s policy. Some politicians, however, continue to understand Putin, but their number has decreased during the conflict. The German government unequivocally has been criticizing Russia’s behaviour. Within the European Union it has changed from a dove into a falcon. It belongs to those who most firmly support sanctions, but at the same time, it is trying to maintain diplomatic contacts and find political solutions.

Maciej Raś and Ewa Szkop
Liczba wyświetleń: 85
The aim of this paper is to analyze the relationships between the Russian Federation and the European Union after the Crimean crisis, as well as to point out the possible directions for further development of cooperation in the new international reality. The authors indicate the factors determining mutual cooperation and present the range of interdependencies between both sides. They convince that the Russia–EU dialog will definitely be continued on specific cooperation platforms, regardless of the events in the international arena. The interdependence analysis in time of the Crimean crisis has been completed with areas of competition, or at least disagreement, between Moscow and Brussels concerning the intensity of the partnership implemented. Emphasis is put on the post-Soviet area as the source of Russia– EU conflict in order to highlight the variety of aspects influencing the relations between Russia and the EU which have a direct impact on the complexity of the above issues. The third part of the paper presents the reaction of the EU to the Russian Federation’s annexation of the Crimea. The authors present the EU approach and the sanctions used against Russia as a result of the Crimean incident, including the influence of the latter on mutual contacts between the sides. The paper summary includes an assessment of previous Russia–EU relationships, including the impact of the Crimean crisis. The authors attempt to determine the directions of possible further cooperation between the Russian Federation and the European Union, indicating the determinants of their mutual contacts which may be relevant in the nearest future.

Jarosław Kuśpit
Liczba wyświetleń: 78
The crisis in the Russian economy was due to the impact of external factors resulting from changes in the international environment. It also resulted from internal factors determined by the specific characteristics of the economy. The economic crisis has caused a much stronger decline in GDP in Russia than in developed economies. It can be hypothesized that Russia’s economic growth is heavily dependent on the situation in foreign trade. This, however, depends on the size of demand and the level of prices for energy resources in foreign markets. The study aims to determine the changes that occurred in Russia’s foreign trade in the years 2008-2013. It also indicates the dependencies that existed between the value, dynamics and balance of trade and the situation of the Russian economy. The analysis carried out in the paper confirms the large dependence of economic growth on the dynamics of Russian exports. Taking into account the structure of commodity exports, dominated by energy resources, one can point to the persistence of the raw nature of the economy. The analysis of foreign trade flows of Russia leads to the conclusion that during the crisis and the first years after the crisis there were no significant changes in the geographical structure of Russia’s trade. But there are changes that have occurred in the structure of commodity trade. In the structure of exports we can observe a continued increase of a share of mineral fuels. This shows that both exports and economic situation depend to a large extent on fluctuations in prices of energy commodities. In contrast, the most serious changes in the commodity structure of imports resulted primarily from the impact of the current economic situation.

Andrzej Szabaciuk
Liczba wyświetleń: 92
The following article is an attempt to present the characteristics of Vladimir Putin’s new integration project, i.e. the Eurasian Economic Union, putting emphasis on the issue of the EEU’s significance in the context of economic and political relations between the Russian Federation and the European Union. One of the fundamental research tasks is to present possible ideological grounds for the Eurasian project and to define the objective determinants promoting the integration of the former Soviet republics within the intended transnational structure. In the course of analysis, the essential differences between the integration model pursued by Moscow and its European equivalents are shown.

Konrad Świder
Liczba wyświetleń: 82
The goal of this article is to reflect on the geopolitical factors affecting the stability and instability of the contemporary Ukrainian state – which is the result of disintegration of the Soviet Union. The article analyzes the state and national construction of Ukraine since the collapse of the Soviet Union to the present, the influence of Russia and widely-understood the West (i.e. The United States, The European Union and The North Atlantic Pact) on this construction. The author presented the views of the main Russian and American geopoliticians on the issue of Ukraine. The basic point of reference is the current situation in Ukraine in the context of the rivalry for this country among most important, and the most interested, geopolitical players. The article also contains a cautious forecast for the future of Ukraine.

Michał Klonowski and Michał Słowikowski
Liczba wyświetleń: 72
The incorporation of the Crimea into the Russian Federation caused an unprecedented increase of tensions in the region of Central and Eastern Europe, as well as in the relations between Russia and the USA and the EU. The decision taken by the Russian authorities produced repercussions of equal importance in Russia itself. The annexation of the Crimea was received with great enthusiasm by the Russian public opinion. The majority of Russians accepted the arguments in favor of the actions taken towards the integration of the Crimea with Russia, along with the attitude of support for opposing Western criticism and economic pressure, and agreed to blame the West for the conflict between Russia and Ukraine. From the perspective of Russian internal politics, the incorporation of the Crimea meant an enormous increase of public legitimization. It reversed the negative trend in the public evaluation of Vladimir Putin’s rule and the direction of state development which started back in 2010.

Andrzej Gil
Liczba wyświetleń: 93
The annexation of the Crimea by, and making it a part of, the Russian Federation not only cast a long shadow on the relations between Russia and Ukraine (formally, both states are members of the Commonwealth of Independent States – an organization which provides, among other things, a platform for a dialogue in international disputes) but also boosted the dynamics of issues connected with the security of the entire Black Sea region. So far, the Black Sea region, despite its instability, particularly in Caucasus and the Middle East, has been regarded as relatively balanced, although the brittle nature of its security has been noticed. Russia’s introduction of a military factor as a prelude to political and system solutions is not only a violation of this delicate balance but also a forecast of further changes which will result in substantial changes in the security structure of the Black Sea region.

Andrzej Jekaterynczuk
Liczba wyświetleń: 84
The mass protests that burst out in Kyiv in November 2013 and spread across all over Ukraine came as a surprise to the Ukrainian authorities, the political opposition in Ukraine, scholars and Ukraine’s powerful neighbour – Russia. These events have triggered many, often contradictory, opinions, interpretations and diagnoses. This paper is an attempt to characterize the 2013- 2014 Kyiv Maidan from the point of view of social sciences. More specifically, to capture the social, demographic and cultural structure of the Euromaidan movement, as well as to present its reasons and motivations and claims of its participants. The results of representative social surveys are expected to verify some popular opinions concerning the phenomenon of the Euromaidan or, in a broader sense, the Euro Revolution (“Revolution of Dignity”). The paper is based on the results of surveys conducted by leading Ukrainian sociologists from the Ilko Kucheriv Democratic Initiatives Foundation and the Kyiv International Institute of Sociology. The repetitive character of the surveys and the construction of survey questions allow to trace the way in which Euromaidan was changing under the repressive measures of President Yanukovych’s law enforcement agencies: from Maidan the Rally, to Maidan the Camp. The paper also aims to show the differences between the Euromaidan and the 2004 Orange Revolution. Particular attention is drawn to the similarities between Euromaidan and recent mass protests in other parts of the world described in the latest publications by the renowned Spanish sociologist Manuel Castells. Focusing on social movements in the Internet era, he uses such notions as digital revolutions and rhizomatic revolutions.